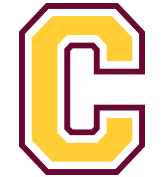 The deadline to submit nominations for 2020 was April 1. Nominations will open again in Spring of 2021.

A team may be eligible for nomination into the Colonie Central High School Athletics Hall of Fame ten (10) years following the noted accomplishment of that team.

A Colonie Central High School coach may be eligible after being retired from coaching at least three (3) years.

An eligible nominee for the Athletic Contributor category is an individual or group who has helped to develop and foster the growth of athletics in the Colonie Central High School athletic community. Any Colonie Central High School athlete, coach, community member or group who has had a significant impact on the athletic community may be eligible for nomination.

The Legacy category is open to any individual, team or coach who participated in athletics prior to the consolidation of the South Colonie Central School District in 1953.

Nomination forms for our Athletic Hall of Fame categories may be submitted below in Spring of 2021. Print versions of these forms are also available by contacting Joe Guardino.

Read more about all of our Colonie Athletics Hall of Fame inductees here. Members are listed in the order of the year they were inducted. The full list of members to date is listed below along with their year of graduation from CCHS.