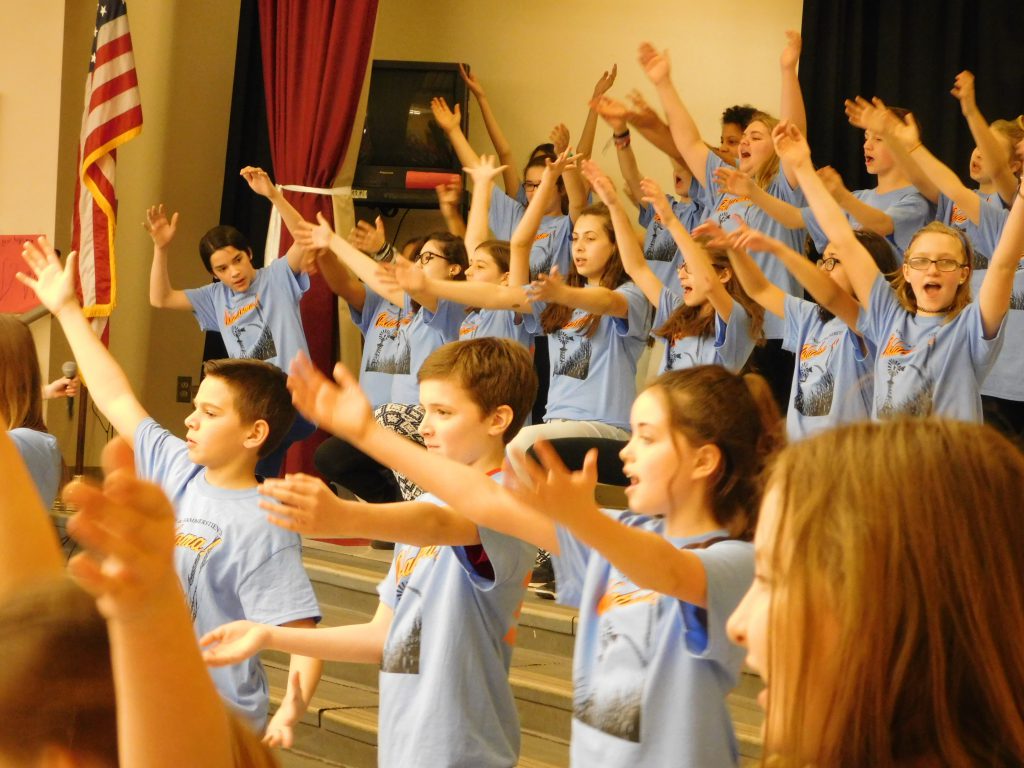 The New York State Education Department has established learning standards for Theater denoting the skills and abilities each student should attain at various levels of his or her education—elementary, middle and high school levels.

Learning Standards for the Arts

The Line and Cue was part of Roessleville High School until the creation of the central school district in the early 1950s.

Line and Cue presents three productions a year: a fall play, a play for children at holiday time, and a musical in the spring. The play and musical are performed in the Mark Cornell Auditorium at the high school and are typically kicked off with a dress rehearsal and Senior Citizens Dinner Theater. The children’s play is taken “on the road” and performed at other district schools.

The club believes that all high school students who wish to participate in the school play should have an opportunity to do so. Consequently, effort is made to find large cast plays and musicals that will give as many students as possible an opportunity to perform and show off their individual talents.

Members of the Line and Cue also perform at area adult homes, and, in the past, the club has sponsored trips to New York City, where students have had the opportunity to participate in performance workshops run by Broadway actors, dancers and technicians. Some Line and Cue members have also had an opportunity to perform on area stages while in high school such as the Cohoes Music Hall, the Schenectady Light Opera Company and Family Players of NENY.

Recent past presentations of the Line and Cue have included The Fantasticks, Lend Me a Tenor, Once Upon a Mattress, The Wedding Singer, Fools,  Big and Beauty and the Beast.

CAST & CREW is open to all students in grades 5-8 and provides its members with opportunities to perform in front of the curtain as well as behind the scenes. Cast sizes average 125 students and anyone who auditions can participate in the musical. All performances are run by the student technicians with adult supervision. The technical crew averages about 25 students and they must submit an application to participate on the crew. Students have the opportunity to perform the show seven times: at Grandparents’ Night, and during four public performances and two daytime performances for the school population. CAST & CREW sponsors trips to see the touring musicals at Proctor’s Theater in Schenectady.

Recent past presentations of the Sand Creek Middle School Cast and Crew have included The Adventures of Tom Sawyer, Gone with the Breeze, Willy Wonka, Dear Edwina, Annie and Bugsy Malone.

The Lisha Kill Middle School Drama Club is for aspiring actors, actresses, singers, dancers, technicians, painters, or people just interested in learning about theater. The Drama Club has grown greatly over the years. Though it started off as a smaller club, the Drama Club’s shows now include an average cast of 70 students and a running and lighting crew of about 15 students. This does not include the numerous parents and who help paint sets, sew costumes, and create props. The Drama Club puts on one musical production a year usually in late winter/early spring. Actors and actresses in the Lisha Kill Drama Club have also had the opportunity to go to Veeder Elementary School where they performed, answered students’ questions about theater, and inspire the younger generation to possibly get involved in drama when they come to the middle school. Past presentations of the Lisha Kill Middle School Drama Club have included Honk (2007), Seussical (2008), Alice in Wonderland (2009), Cinderella (2010), You’re a Good Man Charlie Brown (2011), Annie, Jr. (2012) and Dear Edwina Jr. (2013), Into the Woods (2014), Tied to the Tracks (2014-15), Thoroughly Modern Millie (2016).

South Colonie Friends of Theater Arts, Inc. (SCOFTA) is a not-for-profit organization of parents, teachers, community theaters and all interested parties whose goal is to support and enhance all areas of the district theater/drama clubs and to promote an awareness and appreciation of the talented actors and backstage staff throughout the school district and community.

Here are some objectives SCOFTA attempts to fulfill for our students and district and community:

How can I support this cause?

All SCFOTA money comes from membership dues and donations.

The mission of the South Colonie Central School District is to educate all students to their highest level of academic achievement, realize their full potential and prepare them to become responsible citizens in a global society.