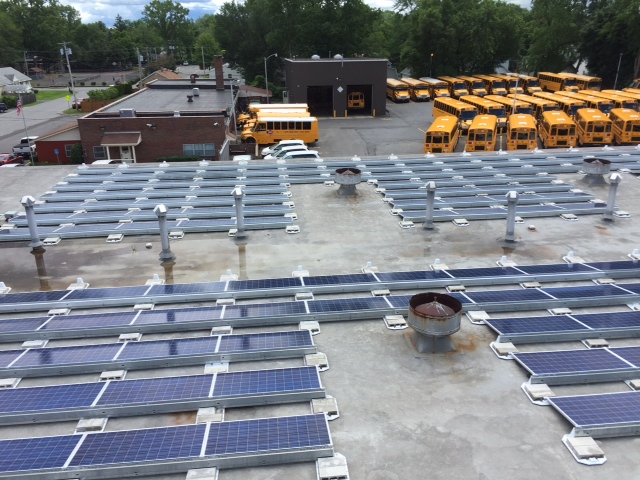 In the works for the past four years, planning and installation of the massive 1.7 megawatt solar panel system is complete and is powering the district’s eight schools, school offices, district office, bus garage and athletic fields.

Nine remote network solar fields from as far away as Queensbury and Seward, and two on campus solar fields at the Transportation Department and high school fields are home to 5,198 solar panels. The solar panels are now generating 1,706,340 watts district-wide and is one of the largest solar powered systems assigned to a public school district in New York State.

New system good for the environment and for taxpayers

With a conservative annual utility inflation estimate of 1.5 percent, South Colonie is projected to save approximately $2.2 million dollars in utility/electricity expenses over the next 20 years by going solar. Actual savings over that time span will likely be much higher than the conservative $2.2 million estimate, said Superintendent Jonathan Buhner.

“Regardless of the total amount of savings, this is great news for the district as those resources can be driven back into programming and academic support for our South Colonie students,” Buhner said.

“We are helping to keep our environment clean by producing 1.7 megawatts of electricity through a clean energy source,” said Sim, ”and we are saving the taxpayers money by reducing utility bills in all of the schools and support buildings. It’s a win-win situation…. setting a good example and saving money.”

South Colonie wrote, applied for, and received a grant approximately four years ago from the New York State Energy Research and Development Authority (NYSERDA). The grant covered all expenses for the solar project with the exception of a normal legal review. The vendor for the solar power is Monolith Solar Associates, which installed the system and will sell the solar power to the district at a fixed rate through a power purchase agreement.

“I think it is important for our community members to understand this was a grant, and the efforts made to acquire this grant have paid off as the district is now seeing the benefits of significant power credits on its monthly utility bills,” Sim added.

While this project has been moving forward piece by piece over the last four years, Board of Education Vice President Rose Gigliello thanked school board members for their fortitude in seeing this major project through to completion.

“What started as a concept combined with NYSERDA grant information in 2013 has evolved into a wonderful accomplishment for the South Colonie Central School District and the community we serve,” Gigliello said.

An educational component to the system

There is an educational component to the solar power system as well. Monolith has created an Internet-based energy monitoring system so students, educators and the community can be “clued in” daily on the solar energy that is generated in South Colonie and each building’s solar power usage. The district is in the process of connecting power production solar field links to individual school websites for the public’s interest and information.