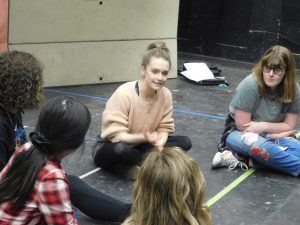 Some of the district’s youngest actors were treated to a mentoring opportunity from a real life Broadway and television star thanks to the support of the South Colonie Friends of Theater Arts organization.

Cathryn Salamone (Wake is her acting name), a 2008 Colonie Central High School graduate, met with high school actors and members of the Lisha Kill Middle School Drama Club recently. Salamone led the group through warm-up exercises and some “cold readings” similar to what they could expect to do during a Broadway audition. She talked about theater work as a career and hobby, the type of courses needed to pursue acting, and spoke about what the directors are looking for from actors in Broadway musicals.

Salamone said she had a wonderful time sharing with South Colonie’s young theater students and was impressed with the talent she witnessed both at the high school level and especially at Lisha Kill. Salamone started acting in fifth grade in the Lisha Kill musical Guys and Dolls, and was amazed the school Drama Club has grown to some 130 participants now.

Today, Salamone is known for many ensemble positions but her big break was acting in The Great Comet with Josh Groban on the Broadway stage. She also had a small role on the TV show Glee playing a teacher.