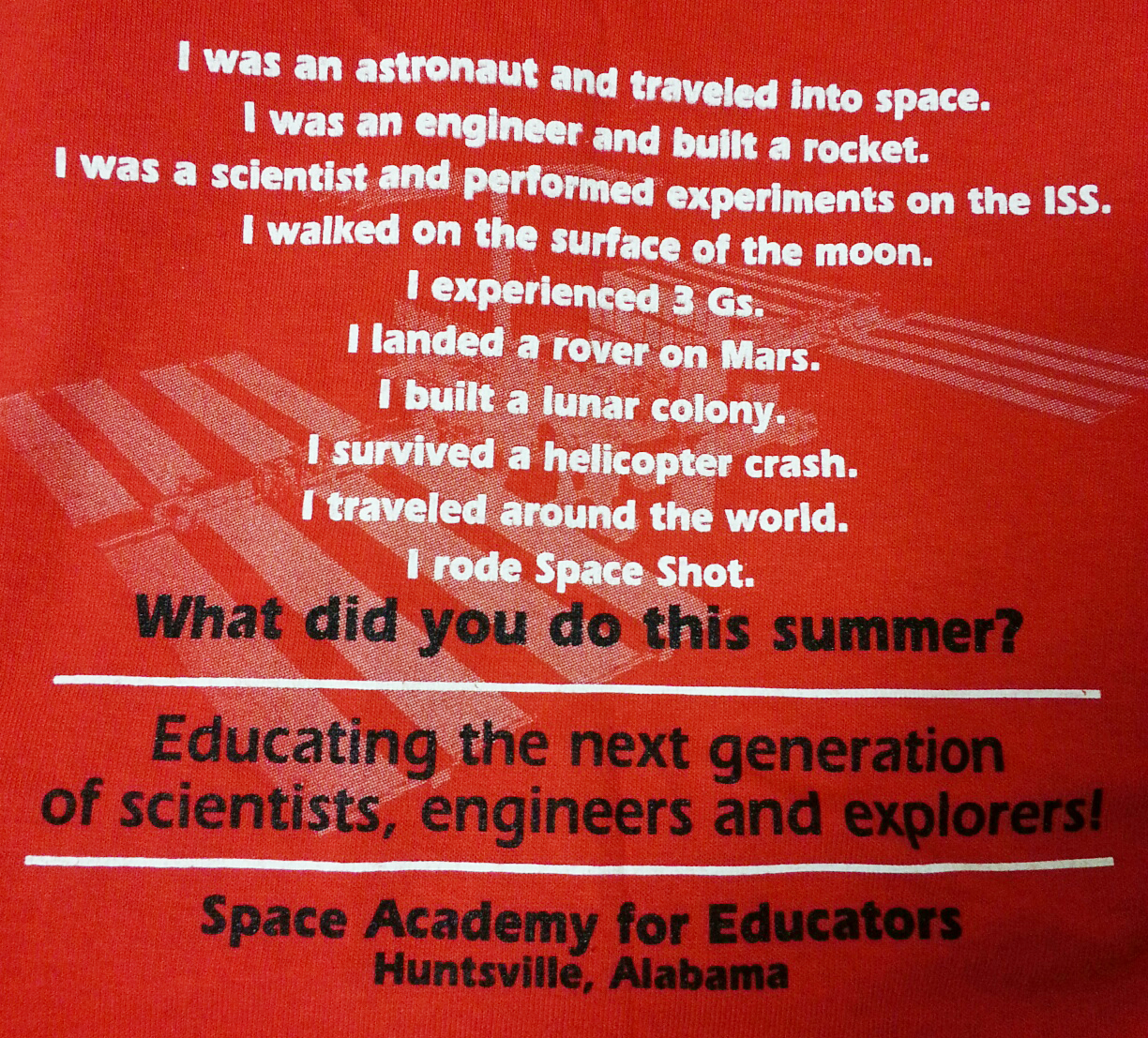 “Consider the Possibilities” is Sand Creek Middle School’s theme for this upcoming school year. That was Donna Davidson’s, one of Sand Creek’s School Social Workers, inspiration as she headed off to the Space Academy for Educators in Huntsville, Alabama this summer. When Davidson’s airplane was delayed three times and she sat at Albany Airport for more than six hours, perhaps she felt some of the same stress, anxiety, and frustration astronauts might feel with the pressures of unexpected obstacles.

Davidson joined 28 science teachers from various parts of the United States, Canada, and China at the academy. This photo of their T-shirt highlights some of their accomplishments during the six day experience. The participants were divided into two groups and it quickly became evident that a priority was to identify each member’s strengths and how to work collaboratively as a team while they learned new skills, completed assignments, and ultimately participated in two simulated space missions. Competition was fierce as the teams were evaluated each hoping to accumulate enough points to earn the coveted “Commander’s Cup” (awarded to Davidson’s team).

The 50th anniversary celebration of the Apollo Moon Mission made it an exciting time to be at the U.S. Space and Rocket Center. NASA officially announced the Artemis Mission. (Apollo is the God of the Sun and his twin sister, Artemis, is the Goddess of the Moon.) With the goal of being back on the moon by 2024 and traveling to Mars by 2028 our students are the next generation of space explorers. Davidson reflected on Margaret Mead’s quote: “We are now at the point where we must educate our children in what no one knew yesterday, and prepare our schools for what no one knows yet.”

Sand Creek’s Eco Club (formerly the Germinators) will continue to focus on planting food, conserving water, and recycling. These are some of the greatest challenges to sustainability on earth, and likewise, without the capacity to create environments that effectively create resources related to food and water consumption, space travel will not be feasible. As the adviser of the Eco Club, Davidson hopes to incorporate lessons this year that she acquired while at the Space Academy.