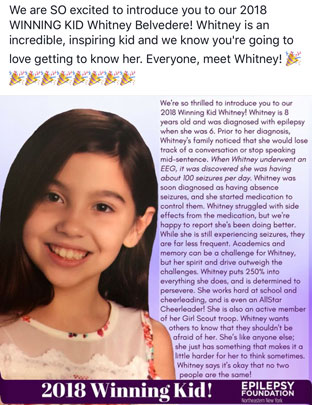 Forest Park Elementary School would like to congratulate Whitney Belvedere for being named the 2018 Winning Kid for the Epilepsy Foundation of Northeast NY.

Whitney is an 8-year-old Forest Park third grader who was diagnosed with epilepsy when she was 6. Prior to her diagnosis, Whitney’s family noticed she would lose track of a conversation or stop speaking mid-sentence.

When Whitney underwent an EEG it was discovered she was having about 100 seizures, and she started medication to control them. Whitney struggled with side effects from the medication, but we are happy to report she is doing better. While she is still experiencing seizures,they are far less frequent.

Academics and memory can be a challenge for Whitney, but her spirit and drive outweigh the challenges. Whitney puts 250 percent into everything she does, and is determined to persevere. She works hard at school and cheerleading, and is even an All Star Cheerleader. She is also an active member of her Girl Scout troop.

Whitney wants other to know that they shouldn’t be afraid of her. She’s like anyone else; she just has something that makes it a little harder for her to think sometimes. Whitney says that she is OK and that no two people are the same.

As the 2018 “Winning Kid” for the Epilepsy Foundation of Northeast NY her mom, Michelle Belvedere says Whitney will be meeting many legislators, politicians and media representatives in the coming weeks to share her story.

Forest Park is very proud of Whitney for her accomplishments.