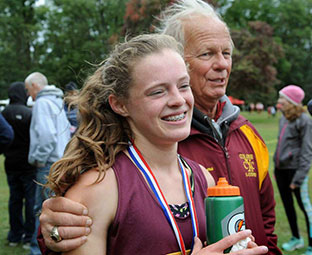 Coach Myers has been a devoted coach in the Colonie Cross Country/Track program for more than three decades, and one of the elite running coaches in the country. Throughout his career he has promoted, organized, and governed many Section 2 cross country / track meets as well as the summer track program in Colonie.

He succeeded Paul Gansle in the fall of 1984. His assistants over the years have included Mike Caccuitto, Maryann Reilly-Johnson, Chris Schultz, Sarah Thomas, Jen Jette and Jamie Ferrari. His teams were State Champions in 1985 and 1999, and were ranked No. 3 in the USA in 1999. Katie Twarog was State Champion in 1998.

Coach Myers, a Colonie High graduate in 1963, was elected to the CCHS Hall of Fame in 1995. He graduated from SUNY-Albany with a Bachelor’s Degree in 1968 and a Master’s Degree in 1977. He has been a business teacher and coach at Colonie Central High School for many years.