Home > archive > Board of Education Honors Students For Special Achievement

The South Colonie Board of Education honored several individuals and groups with President’s Spotlight Awards June 4 for special achievement during the 2018-19 school year and beyond. 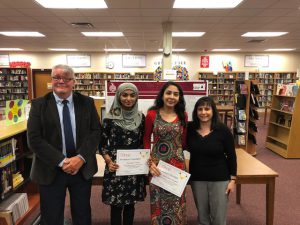 Mariyam Moqbil and Sunnah Yasin participated in the Albany Medical College STEP Program. The students conducted tireless research and presented on student’s knowledge and usage of vaping products at a local level in comparison to the national average. They were involved in presenting information to legislative committees regarding regulations aimed at vaping and minors. They placed first in the Social Sciences category for all of New York State. 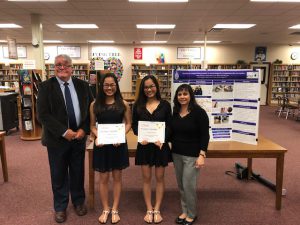 Last year, Project Fibonacci partnered with the Institute of Electrical and Electronics Engineers and various not-for-profit groups to host an engineering contest for students. Nina and Cami Tran submitted the winning proposal to partner with Rome Memorial Hospital for the purpose of developing a product for use by patients being treated for lymphedema. They were awarded $6,500 to research, develop, and bring the products, a lymphedema “shoe,” to the prototype stage. Patients associated with Rome Hospital will trial the prototype shoes. During their research and development phases, Nina and Cami will be mentored by a mechanical engineer who lives in the Albany area, Dr. Hasam Khan. 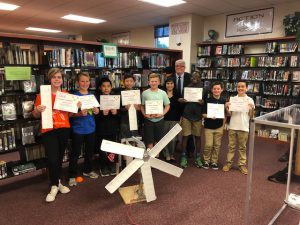 As a result of their outstanding finishes, both teams automatically qualified for the National KidWind Tournament that was held in Houston, Texas on May 22. Most impressive in this competition is that both teams from Sand Creek generated more power than has ever been created by any KidWind team in the 10 year history of the competition. The 84,000 milliwatt/seconds of power that both teams averaged was almost twice the amount of power generated by the winning High School team. This is the second year in a row that a team from Sand Creek Middle School qualified a KidWind team for nationals.

The SC Winnders were announced as one of the top five teams in the nation. The National KidWind Competition recognizes five Middle School teams and five High School Teams as National Champions. After finishing in sixth place last year, the SC Winnders were recognized this year as National Champions. The Sonic Spinners were not recognized as national champions, but they did a fantastic job in the competition. Congratulations to students: